Permaculture is a composite term of Permanent Agriculture and Permanent Culture. The goal of permaculture is a process of interaction between humans and their surrounding nature, aimed at the long-term survival of both. With permaculture, you design a functional system around humans with the strength and resilience of a natural ecosystem. Permaculture is designing with nature.

Permaculture is a bundle of knowhow to design a functional ecosystem around people. In doing so, permaculture considers humans to be part of the ecosystem and not something beside or above it. These designs can focus on food supply, water purification, forest fire protection, etc. A permaculture system can also focus on several functions at once. People need to make a choice of what function the ecosystem they want to design should have. On the basis of that goal, a start can be made on designing a good system.

The background of permaculture.

Permaculture was defined in the 1970s by Bill Mollison and David Holmgren at the University of Tasmania. Over the years, these Australian biologists researched how ecosystems worked in the forests of Tasmania. They wanted to use these principles to see if humans themselves are capable of designing an ecosystem with a function for humans, but which also benefits nature as much as possible. They wanted to do this partly as a reaction to current agriculture, which has various problems.

Monoculture systems are extremely vulnerable to disease because of
the lack of natural diversity in the system. This problem has shown itself in
many countries both in crops and in livestock in recent years often shown. With preventive mass extermination of millions of chickens, pigs, goats etc. as a result. Furthermore, desertification and soil erosion took on frightening forms in Australia. And last but not least, problems such as fertilizers polluting the groundwater and the use of too many pesticides resulting in bee deaths are a major problem worldwide.

Permaculture has successfully sought solutions to these problems. With the techniques of permaculture, ecosystems have now been rebuilt all over the world. There solutions have been found for the burning of old-growth forests, which is a common problem in third world agriculture. agriculture in the third world. In addition, pieces of desert have been transformed back into usable, productive land by intelligently applying the ecological principles on which permaculture is based. principles that underlie permaculture.

How does it work?

You could say that all living organisms have one basic purpose here on earth, that goal is survival. Every living organism, from woodlouse to zebra to human being, tries to continue to exist as best possible. Permaculture is focused on the long-term survival of man and nature by making them work together as efficiently as possible. For our survival we are dependent on many organisms, and plants are an important group of them. It is therefore interesting to look at what plants need to grow well. Plants need only 4 things at the base; water, nutrients, carbon dioxide and sunlight/heat. Some of these basic necessities are under the influence of the so-called ecological key factors.

As mentioned earlier, permaculture is a design system to create functional ecosystem. . In order to build an ecosystem, it is important to know its main building blocks of it. What are the main ecological factors that determine life here on Earth for the most part? For this, let’s zoom out for a moment, out of our home, th town, province, country, continent, even beyond our earth. What do we see then?

The sun is the energy supply of our solar system. Our earth orbits in 365.25 days around this “energy factory.” In addition, the Earth revolves around its own axis every 24 hours. These two cycles create the different seasons and the difference between day and night. The plants that developed on the earth have evolved on Earth have done so based in part on these two cycles.

The sun is the source of almost all life on earth. It provides the energy that plants (producers) need to grow. With the help of sunlight and heat, plants form organic matter from water and carbon dioxide. This process is also called photosynthesis. With this, the sun is the first ecological main factor; in addition, it causes the other two main factors: the water cycle that allows for the availability of fresh water and the wind currents that we know on Earth.

Almost all land plants and animals are directly dependent on the availability of fresh water. The surface of our planet consists largely of the salt water unusable by plants. Due to the heat of the sun, this salt water evaporates leaving the salt behind. The evaporated water rises and condenses in the higher cold layers of the atmosphere causing clouds to form. From these clouds rain falls on the solid surface of the land giving us fresh water on land.

This fresh water is at the source of everything that grows and flourishes on our land surfaces. The availability of fresh water is the second main ecological factor.

Wind can have a major impact on plant growth and is therefore the third main ecological factor. The north wind is often considerably colder than the south wind. By choosing a particular design you can keep the cold wind out of your system. To do this properly, you can ask the following questions: What is the dominant wind direction? Where does the coldest wind come from and where does the warmest come from? Which wind is strongest? What plants can I put where in my system to literally turn the wind away?

The 3 main factors together

The combination of these 3 ecological main factors is at the basis of plant growth. The importance of each main factor varies by area. In Africa, the sun is abundant and fresh water is often the constraint to get a functioning ecosystem. In Northern Europe, we usually have more than enough water and the sun is just the limiting factor. Therefore, a permaculture design in Africa will be mainly focused on water harvesting. In Northern Europe, the design will focus on maximizing solar absorption.

The wind is often a factor that plays an important role locally; in a windless area you need take little account of it and in an area where there is a lot of the wind you need to design a system to divert the wind.

In this drawing you see the top view of a so-called solar circle. The solar circle is a typical design for a place where the sun is the limiting factor. Here are five large fruit trees in a half circle facing south. In this way they catch as much sun as possible without competing with each other for sunlight. In addition, there are four berry bushes on the south side between the trees. On the north side are eight more fruit bushes. This makes for a good dense sun circle while they all catch quite a bit of sun. Furthermore, the water in the middle provides extra light for the plants in the circle by the reflection of the sun on the water. In fact, this reflected light is reflected straight to the trees. On top of this, the pond provides water and serves as a home for frogs and salamanders that control various insect populations. In good weather, because of the shelter of the trees, the waterhole is also ideal for people to swim in. And that is the essence of permaculture; benefit to nature and people simply through clever design. 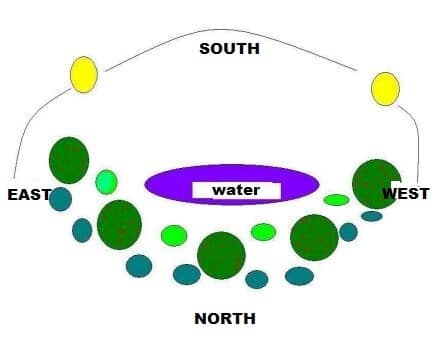 The windproof solar circle with fruit

Instead of water in the middle, this design chose fertile soil. Furthermore, the design is more focused on keeping out the colder winds from the north and east. In addition, the west wind is also kept out to a reasonable extent in this design. Because the sun is optimally captured and the wind is directed around your system, you create a windless place in the middle where the sun is shining brightly. This microclimate is extra warm and very beneficial for plants that need it. This place is ideal for plants that like a lot of sun, such as pumpkins, cucumbers, tomatoes, etc. Of course, you can also turn the circle around to get a shady center. So in Spain and Africa you will rather choose an inverted sun circle. Also, by placing a good windbreak around your own house you can save a lot of energy. This is because the wind dissipates less heat so you don’t have to turn the heater on again so quickly. If you make such a screen from walnuts, chestnuts and hazelnuts you can enjoy the harvest of your windbreak in the autumn. Again, a situation where the knife cuts both ways by using a smart system. This last example is focused on using water as efficiently as possible. First, there are bends in the river. Such a winding river/water ditch is also called a swale in permaculture. These swales cause water to flow slower and allow more water to be drawn into the soil. (Swales are dug on hills at the same elevation line so that runoff water from the mountain is collected and goes into the soil. Without swales, water flows off hills often quickly and because of the speed, a lot of land wants to flow with it). Furthermore, in this design the trees are positioned between the sun and the river. This ensures that the water is shaded from sunrise to sunset. This means that a lot less water evaporates. There could also be bushes placed around the water stream so that the wind has less influence and even less water evaporates. This design is widely used in countries where water is the limiting factor. 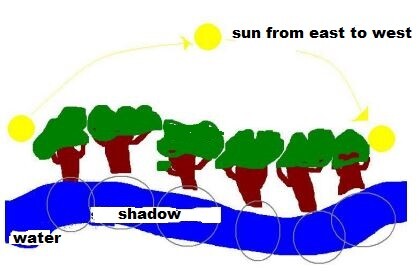 This article introduced you to the most important principle of permaculture namely the basic design of the permaculture system. Here you lay down the broad outlines of how the system will be organized. It is important that you start filling the design with plants. The role and importance of plants will be discussed in the next article.

PrevPreviousWays of Lying to Yourself About Your New Relationship.
NexttestpageNext

The Great Culling: Our Water Bitcoin is money used by criminals