Song Title: You’re All I Need

A couple of updates ago we were still not seeing much hurricanes develop and the charts were showing that.  Since then Fiona certainly took a toll on Puerto Rico having over ~1mm people without electricity.  Now, in current real time, we have Ian in category 4 phase (approaching category 5) and hitting the gulf coast of FL. Transmission lines and other electrical infrastructure certainly will be effected. I hope everyone stays safe down there.  The 6-10 and 8-14 day temperature outlook is shaping up to be an above average beginning of October with a lot of warmth consistent throughout the western part of the country.  Now sitting officially in the ‘shoulder season’ and with the La Niña possibly extending throughout the rest of the year, it’s could be possible to see a slightly above average winter.  Seasonal outlook is still printing an above average weather for most of the country.   Although if you fancy the farmers almanac that is saying  ‘unreasonable cold and snowy’ for the eastern part of the country.  Yall know how I feel about the weather predictions.   Check the charts for the visual.

The key here to look is at, ‘due to market volatility we are pulling our curves and will submit them soon’.  This is such a loaded statement.  Suppliers that don’t have generation assets or a large enough balance sheet to lever will use banks, hedge funds and others ‘pricing curves’ to then spit back out to off takers for retail supply.  This is the primary way that pricing gets to the retail electricity supply market. Remember if you have a meter, you are purchasing retail supply and only large wholesale entities will buy it to the resell then retail.  Due to the large fall out in the natural gas pricing some halted distributing their curves to the market.  Again there is just too much speculation $ in the market as well as just the forward volatility is unmeasurable to say the least.  To me this ‘halting pricing’ is a wild concept however it happens from time to time again.  Apparently this is the new norm for retail energy suppliers going forward since no one can predict the real time change of market conditions.  In other news, Manchin is really trying to push along with speed this IRA (Inflation Reduction Act).  You have republicans calling it a ‘phony fig leaf’ and you have the democrats trying to move NEPA ahead trying to allow the fed to come in and quicken approval processes, which is always a big hold up.  Also the need for transmission lines is a serious thing to discuss as we need it.  However this could pressure the state jurisdiction  by allow the feds to step in and just override the state for approval processes. Not to mention the state (one would think) has more of finger on the pulse as to how infrastructure implementation can actually become real. This, in my opinion, is not good for rate payers in the coming future.  Keep an eye on this.

It actually is really nice to see us now sitting in the shoulder months, weather wise, and having the off peak electricity print ~$20/mwh in most ISOs (Independent System Operator).  I have not seen that in some time, and we’re talking multiple hourly settlements printing that number.  Anyone that is open can breathe a bit, but just around the corner is winter.  On Peak demand is softening as well as power burn for electric generation.  Going back to what I mentioned in the market intel section, once those curves came out (and they did) were seeing some nice drop now in electron pricing. No current price compares to the all time lows that I mentioned in last weeks article however if you go out far enough in the curve you will see pricing that same current price printed over 6 months ago.  Something to mention is National Grid raising residential, commercial and industrial electricity pricing to the tune of ~195% going from .1149/kwh to .3389/kwh. And industrial offtakers are in the middle at approximately .287/kwh .  Yes you read this correctly.  Absolutely insane but not out of the ordinary for ISO-NE folks.  You are really seeing lobbyist, legislatures, utilities, and REP’s just paying attention to pricing and a lot of off takers are now taking notice, obviously.

I have been watching the prompt contract move.  Starting on June 8th 2022 NG dropped on the prompt month contract from ~9.486 down/mmbtu to ~5.289/mmbtu.  Some market fundamentals came into play with Freeport LNG facility coming off line which really drove price down.  However the price move was short lived as NG then came right back to almost $10/mmbtu on Aug 23 2022.  Seeing the same move happen here now with the prompt month currently trading ~6.567/mmbtu and continue to be soft.  The prompt month (October) closes today and remember, a few times this year we have seen sharp run ups in NG on the monthly closed date and thus the CFTC is ‘looking into this’ as some form of market manipulation (TBD).  Production is still ramping and supply is loosing ground day over day with us having softer weather in some regions as well at the storage build being 103 BCF.  I am watching storage injections closely as that printed storage number for the week of 9/16/22 was higher than the survey and pulled the bears out to play ball it seems.  I remain optimistic however there is something to where NG pricing is laying currently.  Current strong support at the ~6.112/mmbtu level, resistance around ~7.112/mmbtu. Rig counts look decent still although some markets aren’t growing much, see drilling report.

Finally I see that LNG export hit 12/bcf per day.  Most LNG analyst are stating that LNG demand will double here in the next 2-3 years and I would agree with that.  Certainly is gaining a lot of market interest as the EU is under constraint as well as now some mess going on with Nordstream 1 and 2.  The NordStream issue is an interesting one especially theres tremendous noise around the subject.  With Cheinere’s turbines needing more EPA approval due to their expiration and with no real news coming out of Freeport LNG, this could be interesting especially if the US is prized for saving the EU this winter.  Politicans would need to get moving.

This week is a special week for me.  Tomorrow my wife and I celebrate 10 years together.  Time flies when you’re having fun.  We have been through a lot.  She puts up with all my blabbering about energy, markets, bitcoin and alike.  Theres a line in the song that I suggested above, “we can make war, or babies”, we chose the latter.  A wise person told me once, Happy Wife Happy Life.  I can’t speak for all but I honestly would be dead rotting in hell if I didnt have her by my side.

I hope everyone is safe in FL with the hurricane Ian.  Hold yours close and peace and love to all. 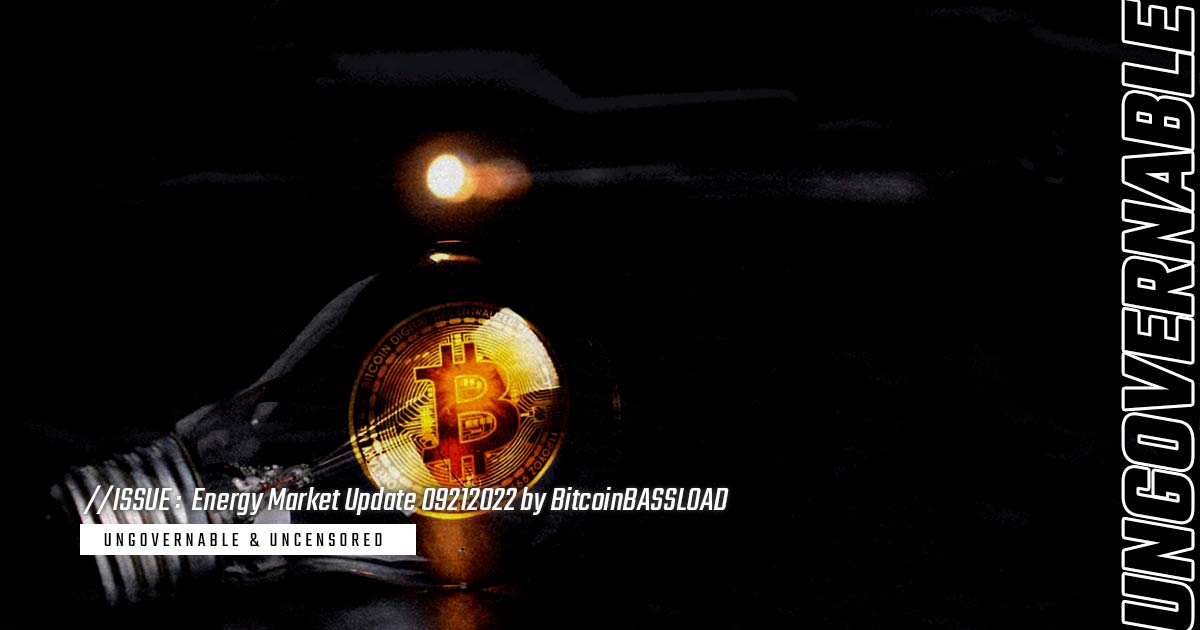